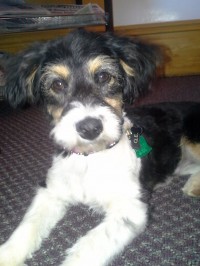 I've taken my dog to work with me (massage therapy) occasionally since she was about 5 months old. As soon as all her shots were finished.

She is very mellow for a puppy. She loves to greet the clients and send them off with her soft sweet nature. She stays under the massage table the whole time and just sleeps. We take potty and walking breaks in between clients and then we go home.
I think she likes it but I'm not sure.

Terri came in one day to my massage room and saw my sweet little dog and it was, of course, love at first sight for both of them. So I asked Terri if my pup likes to come to work, because she always resists getting into the car and I just can't tell for sure if she likes to sit so quietly for so long, being a puppy and all.

Terri said she just likes to be with me. Doesn't matter what we're doing. Well, that just fixed everything for me. I had no idea she liked that so much.

Whenever Terri comes I try to have my puppy there. She loves to see Terri and Terri has told me other fun things about and from her. Like when I'm eating my lunch my puppy says: Food?
When I give her a couple bites of meat she eats it and says: More?

It's fun knowing Terri and hearing her renditions of what my pets say.
~ Adrienne
Reno, NV 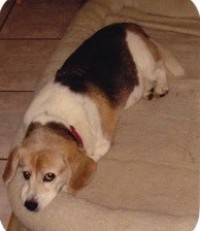 My beagle, Lady, had not been feeling well for some time and the time came that I needed to put her down.

I talked to Terri and she told me that Sam, my other beagle, had told Lady she had done what she came for and could now pass on (she saw me through a serious illness). She told Terri that I was going on a trip and she didn't want to die while I was gone. She wanted me with her.

I cancelled one trip, because I knew she wasn't feeling good.

A little over a week before I was to leave on my trip, she seemed to be going down hill fast. I had her at the vet's office one afternoon and she was doing well. The next morning she was getting worse. I took her back to the vet and I knew what I had to do. Lady had been part of my life for 13 years.

Since Terri could talk to both Lady and Sam and tell me what was going on, I felt much better. It still hurt, but I know she's in a better place with no pain and I was with her the whole time.

Thank you, Terri for letting me know what she wanted. I felt better, although it still hurts to lose a friend.

Sam and I are doing really well.

My 16 year old shih tzu, Pixi, developed health issues over the past five years. At times she's been very sick. Terri has worked (energetically) on Pixi and she even overcame pancreatitis. Pixi also had problems with food and lost weight. Terri recommended a different food, a probiotic and a rotation of flavor nutrients. Pixi eats this combination and is gaining weight. Terri is very gentle with Pixi and Pixi trusts and loves her.

Editor's note: Pixi has a tendency to be extremely finicky, extraordinarily stubborn and would often rather starve than give in and eat something she perceives as boring or not to her high standards. Pixi would voice her dislike for her food when asked why she wasn't eating. "It's boring!" She would proclaim with no hesitation. She's royalty in a little furry body. I love Pixi too! She's a funny little pup.